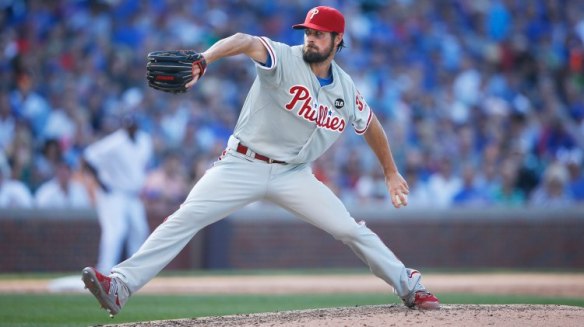 Though slowed in his later years by Alzheimer’s, Lyon’s work, even about his battle with “Al”, was a pure pleasure to read, and something I used many times in my English classroom.

Below is my homage to his skill, written in 2009 during the second year of the Phillies magical run at two pennants.

I will miss your talent, Bill.  They don’t make ’em like you anymore.

Bill Lyon (center) in the Inquirer newsroom, circa 1990  (from inquirer.com)

(*I wrote the following as an e-mail to my middle school colleagues.)

“You might remember last year when I sent around an e-mail regarding poetry in everyday language.  It would have been around this time (actually, it was 10/27/08), and I referenced a line from retired Inquirer sportswriter Bill Lyon.  Bill had described Cole Hamels’ delivery to the plate as “a lawn chair unfolding, a gangling tangle of loose limbs that flummox hitters.”

Cole’s chair is a bit rusty this year, but Cliff Lee?  Well that’s another story, and Bill’s written another entry for your “poetry in everyday language” folder.

“Tenderly he rakes the dirt with his cleats, windmills both arms three vigorous times, turns to face second base, and fires a phantom pitch there.

“Then, ritual complete, he turns around and sets about turning the Los Angeles Dodgers around.  Also, inside out.  And every which way but loose.

[Here’s the simile…you knew it was coming.]

“Cliff Lee pitches like a man late for a date.

“Get the ball.  Throw the ball. Swing and miss. Next.

“Rawboned and lanky, the hired lefthanded gun of the Phillies, on this gelid October evening is seeking to get his team halfway to the World Series, and they oblige by presenting him with four runs of Thunder Ball in their very first at-bats.”

Gelid?????  Come on!  When was the last time you saw that word in the sports section!  I wouldn’t be surprised if Lyon wasn’t chomping on cigars, filling out the box scores, and telegraphing in his story, like they did back in the day:  Grantland Rice, Red Barber, Bill Lyon—that’s his family tree.

And while I risk turning this simple, beautiful observation into a homily, I’ll say that what we can learn from baseball, Phillies baseball particularly, is that sometimes, all that effort, all that struggle, all the waiting, the slow pace of the game that so irks today’s “hit ‘em hard, play it fast” crowd… what we can learn is it all pays off in the end.  Just so with Mr. Lyon.  Slow down, take the time, enjoy the story.  There’s more to the game than the stats and the final score you get “tweeted” to your hip in bulleted points.  Attention to the craft, to the crafting of words … it’s the same as working a 3-2 count from an 0-2 start.  And once you’re there, Bill Lyon hits a homerun most every time.