I’ve been thinking more about what it would take to redesign an educational system to honor student agency and center the learning where it belongs…on the learner.

First, we need to have some idea of what knowledge and skills an educated person ought to possess.  I wonder how many administrators/teachers/citizens have a common picture of what that person looks like.  We could refer to the standards, but inferring from those to the real world seems hard for some, and their codification and commodification (from the outset, in terms of big business’s influence of the creation of the Common Core) is a non-starter to many.  Instead, in the face of innovation-speak and market economies, a better picture can be drawn from the tradition of a liberal education.

I was a fortunate learner.  Somehow I developed/possessed the skills necessary to win the game of school.  This allowed me the great fortune to explore the meaning and importance of a liberal education for over 25 years.  One document in that time has meant more to me in terms of getting that “picture” of an educated person than any other: “Only Connect:  The Goals of a Liberal Education” by Professor William Cronon.  I’ve studied that document and revisited it every year I’ve taught.  It is part of me.  As such, I have a  particular and, I think, historically accurate (though culturally and ethnically skewed) view of what an educated person ought to know and be able to do. 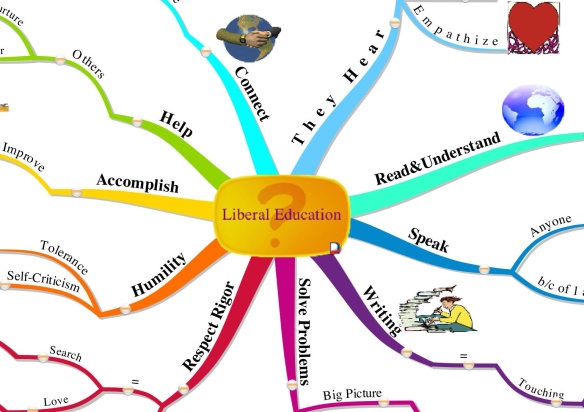 Thus, at least in some part, redesigning schools necessitates designing/redesigning curricula to create modern pathways to the goals of a liberally educated person.  Further, though…schools need to have a common picture of their end and language with which to talk about the learning experiences they can design to help all learners get there.

Education as an Organic System

Still, none of that matters if the school leaders, both administrators and citizens on school boards and in other elected offices, do not view education as more than some assembly line/linear process.

“Liberal” (as in the “liberal education” which public schools purport to provide), as Cronon points out, derives from a proto-Indo–European root, “rodhati”, meaning “one climbs, one grows.”  Clearly, education wasn’t originally viewed as a linear, mechanistic process, but rather as an organic/dynamic system.  Like a vine, it rises to the light, adjusts, stalls, changes, and moves up again.  It is always overcoming obstacles, making course corrections.  It does not follow rubrics or recipes. It seeks the light. 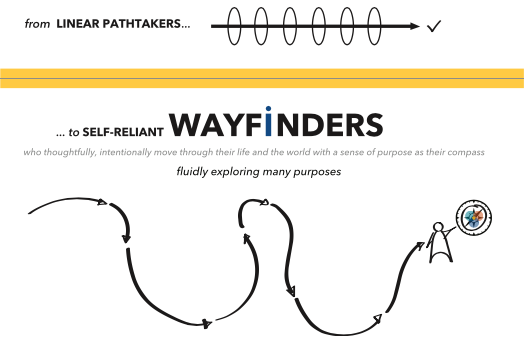 From Patrick Cook-Deegan “Wayfinding Our Purpose” in Purpose Rising: A Global Movement of Transformation and Meaning, Kuntzelman and Diperna, eds.

But linear systems are easier and more efficient for humans to create, and so we wind up with a school system that works in a linear fashion.  Of course, we know this is not the best system for education–one of the most important responsibilities of any community–yet, here we are, blind and deaf in a world filled with educators, parents, business people all pointing clearly for the need to change our system. (While a thorough listing of these change agents would take far too long.  See below for an attempt at such.)

So how do we wake up, open our eyes and ears and risk the upheaval inherent in change?  Primarily, it starts with a culture shift.  Our communities and school leaders need to create cultures where calculated/educated risk-taking is part of the environment, where such traits as courage, persistence, creativity, and risk-taking are what we look for, not only in our students but in the lead learners hired for our schools.  This would entail the questioning and the slaying of many sacred cows such as:  grading systems, standardized testing, strict schedules in the school day, the role of the teacher themself, diplomas, transcripts, and the role of higher education as a driver of secondary curricula, etc.

Get a B.S. Detector

If we are to truly shift our systems of public education,  we need the same thing that Hemingway said all great writers need:  a great B.S. detector.  It’s so easy to want to jump on the new, the ed-tech, the subversive, the test-prep, the “innovative” because it seems so…shiny and data is so “objective.”  And yet,  so much of it is B.S.

At the most basic level, our understanding of human beings hasn’t grown all that much. The observations of the Progressives about the classroom environment, the efficacy of discovery learning, and (still) the work of Dewey are ever reified in the studies of more modern social scientists.  While our potential is infinite, our learning interventions need not be so.  Human beings require meaningful relationships, connection with their natural environment, and a sense of joy and purpose in what they do if they are to grow and learn.  (We do not learn through coercion unless the learning goal is how to despise learning.  I recommend William Glasser’s The Quality School and The Quality Schoolteacher for more on that point.) If we can use these needs to guide our schools past the dictates of efficiency and cost savings (a daunting task) we’ll have a more humane society, perhaps.

Finally, we cannot overlook the fact that, at its heart, American Public Education will always be driven by three goals:  Economic, Civic, and Personal.  (Erin Raab names four…and I’d not disagree with her, though the Eudaemonic goal–Aristotle’s “Flourishing”– I’d fold into the “personal” (again, see Cronon’s “Only Connect”).)  While we’d like to think there is no hierarchy in these goals, the economic goal generally dominates and pushes the other goals behind it.  Its ends are to ensure the continuation of the free market capitalism that is the foundation for our own form of democracy and which makes our pursuit of happiness (the personal ends) possible.  While I’d rather think it otherwise, I have to believe that without a functioning economy, our government and our own pursuit of self-actualization break down.  Empirically, look to our devolution as a political society and our hunkering down with those most like ourselves post-2008 market crash as evidence. So we must always consider that the culture our schools create is geared towards feeding a hungry, (sometimes beneficient) monster…though monster nonetheless.

But that monster need not be as frightening and consumptive as I paint it.  An education that puts the human at the center, that recognizes as its end the elevation of all learners so that they may reach their own highest potential could ameliorate many of the more base effects of the economic ends.  Of course, that can only happen within a functioning democracy and that end, the civic end, of public education, cannot be overlooked.  We must understand and be driven by the sense that Jefferson noted when he wrote that “A people who seek to remain ignorant and free, expect what never was and never will be.”

It is no secret that education is a Wicked Problem. We will always be at it…tweaking, pushing, pulling, and at times disrupting.  We’ll never solve it. The best we can do is hope to manage it better and seek balance among our goals.  But none of that should ever, must never, distract us from what I believe is William Cronon’s most important point in “Only Connect“:

“In the act of making us free, it [a liberal education] also binds us to the communities that gave us our freedom in the first place; it makes us responsible to those communities in ways that limit our freedom. In the end, it turns out that liberty is not about thinking or saying or doing whatever we want. It is about exercising our freedom in such a way as to make a difference in the world and make a difference for more than just ourselves…Liberal education nurtures human freedom in the service of human community” (pp 5-6).

And so, the picture we need of this learner is not intended to create a template for some standardized form of “liberally educated widget maker.”  Rather the picture will serve to show us that these learners, these children so full of freedom and potential, reveal to us our own best selves, and their education represents our own highest potential.

We, as communities across the world, therefore have a responsibility to our future that is different than what our public system currently seeks.  We are not here to replicate the present.  To, in a sense, create children in our own image.  We are here to create spaces for learning that are filled with inspiration and that are driven by aspirations.

Which is why a district and community that seeks to create plans or visions for its continued existence ought to engage in concerted future searching at least once every 15 years.  School systems that never engage in such deep and comprehensive planning will never see beyond themselves, will never find the capabilities to move beyond themselves and embody the very aspirations we want four our students.

1 thought on “Education for the Self and Community”